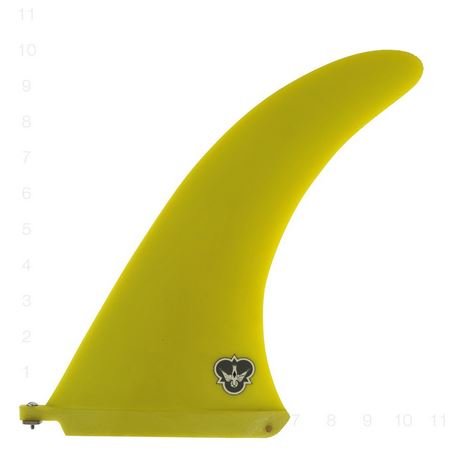 The Power Flex was designed by CJ Nelson in order to enhance each aspect of his longboarding style. Originally drawn up in Torquay Australia by CJ, the Power Flex was first foiled by the infamous wiz, Bryon Shire, and put to the test on a complete coastal tour of eastern Australia.

The concept was to make a fin that would merge the noseride capabilities of a Cali style pivot with the spunky slash of legendary Aussie slashing fins known to enhance maneuverability, generate speed out of turns, and steady enough for quick trips up to the nose. The Power Flex was built with a wide base and upright stance that allows for great pivot stalls but also lets you link together turns without losing drive or speed. It’s stiffer flex delivers power and predictability.

We have built these fins in a number of sizes to work with the variety of different surfboard options. CJ rides the 11″ in most of his large logs ranging from 9’8″-10’0″ but will size down to the 10″ or 10.5″ when surfing his smaller logs or eggs in the 8’0″-9’6″ range. He will also adjust depending on how large the surf is or how much torque he is inspired to surf with. Bigger fins for more size and torque.

CJ: “This fin is an unbelievable addition to your quiver and will definitely turn up the performance level of any single fin longboard or egg.”